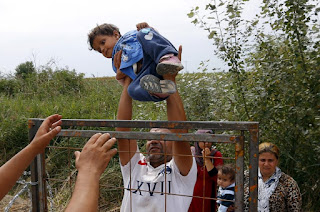 When Wall Street tanks or enters a manic-depressive phase like this week’s dizzying see-saw with wildly gyrating prices up and (mostly) down, the financial press promptly describes a “flight to safety” among the investment professionals who populate that arena. This means they massively purchase safe haven assets such as high-quality bonds, Treasury bills, and other low-yield but conservative instruments with low price volatility.

In less troubled times, these same money managers will shop around for riskier but potentially far more lucrative purchases like low-rated bonds including junk, foreign shares, bundled loans, derivatives of mind-numbing complexity and variety, and of course individual stocks that they can pick based on their mysterious formulae for crystal-ball gazing.

Once the storm passes, the cash mavens then gingerly re-enter the risk marketplace and start pulling their gazillions out of the virtual safe deposits and re-enter the vast casino of modern finance. This time, however, a nagging worry has popped up in some of the accounts: one of the “safe” havens, which should be showing a rise in value given the huge increase in demand, is also sagging along with all other asset categories. Thirty-year U.S. Treasury bonds, instead of appreciating with the influx of new cash, started to drop along with stocks.

This isn’t supposed to happen, because markets: there, increased demand must always and ever lead to higher prices in this, the best of all possible worlds. Why isn’t this week’s “flight” not generating the expected rise in such a supposedly “safe” asset?

One need not possess specialized knowledge of financial markets to see that this is an anomaly with possibly significant implications. We can await expert analysis that should emerge in due course, but for now let’s assume that we are back in a familiar terrain: that of “no one knows anything.” We’ve been through enough recently to know that we assume the existence of any expertise at the top at our peril—beyond, that is, the obvious expertise among our feckless leaders in arranging for their own short-term advantages.

The stock market is historically overvalued to an insane degree and has been for years since the masters of our universe decided not to alleviate the debt burden weighing down average folks but rather to pour giga-buckets of hot cash into the financial system to buoy up prices of all that magical money-paper as well as real estate. (Home prices in many U.S. cities are now above the values of the pre-crash housing boom.) Near-zero interest rates, “QE” (quantitative easing, or money flooding), share buybacks, tax breaks for the uber-wealthy—all these tactics deployed to the delight of the 1%, the 0.1%, and the 0.0000001% have created a steady boom in electronic wealth that hovers in the ionospheric peaks of our skewed income distribution chart. Virtually none of it seeps or oozes down (a Reaganite trickle would feel like Niagara Falls at this juncture) to the beleaguered wood-hewers and water-drawers long since abandoned by both the major parties.

Thus the flight to a dubious safe harbor falters as the Federal Reserve doubles down on the Obama-Trump strategy and pumps an additional $4 trillion into the financial system in hopes that the gaping hole in Wall Street’s dike can be plugged before the entire island of Manhattan is flooded. Will it work? No one knows.

Speaking of flights and safety, Boeing is hoovering up nearly $14 billion from an urgently arranged credit line with major banks just as its stock price nose-dived 18% in a single day (March 11). The metaphor is rude but fair given Boeing’s poor performance in keeping its airplanes from falling out of the sky with passengers secured buckled into their seats. The company needed the cash infusion because it has systematically impoverished itself through share buybacks to the tune of $46 billion in the last seven years. This lucre flowed to owners of Boeing shares as the stock price tripled but did not contribute to things like, um, building safe airplanes.

Actually producing a good product wasn’t necessary since the Federal Aviation Administration (FAA) had been muscled into passivity through years of intimidation and ideological (gummint-is-the-problem) abuse from Washington. Boeing essentially was allowed to police itself, and its managers regularly browbeat and threatened the company’s own engineers to force them to sign off on dubious work.

Now that the damage is done, Boeing scrambles to reassure nervous passengers that it actually does know how to build an aircraft that remains aloft. The problem, however, is that the U.S. has so lost credibility as a regulatory agent that European, Chinese, and perhaps other aviation authorities won’t accept the FAA’s imprimatur and will conduct their own reviews—and who knows when? Boeing is so screwed that it may end up flying into the loving arms of the Federal Government for succor and the inevitable socialism-for-the-rich bailout now that it has earned an “F” in market economics.

It’s easy to sneer at corporate incompetence and investor panic, but they’re hardly alone in seeking flights to safety. Voters, too, are obsessively focused on their fear and loathing of Trump as a symbol of all that is wrong with the country’s current trajectory and manifest an agonizing desire to fly, fly away. I witnessed it directly and in person on the campaign trail in three states where voters insisted that fear was the appropriate guiding principle for their vote this spring and later this fall. Fear of Trump, of course, but also fear of other voters and their presumed fearfulness of the Sanders program, fear of socialism and fear of other people’s fear of socialism. Ironically, young Democrat voters, who have perhaps the most concrete motive for fear—fear for their own futures—are the least cowed.

The decisive swing by the Democratic party electorate to a Biden candidacy is surely another flight to supposed safety, a safety of nostalgia for happier, saner times. It is also a flight backwards, toward a different narrative with its own fantasies, albeit less crude than the Trumpian variety, personified by Biden, a hoary symbol and also a serial fabulist in his own right. And it is a flight toward continued passivity, the hope that someone up there in the distant realms of power will somehow manage to right the creaky ship of state without any major effort from the citizenry. Like the scramble for long T-bills, this flight to safety will provide only short-term relief.

[to receive alerts of new posts, send an email to tfrasca@yahoo.com]

Excellent piece and as always, hits the nail on the head.
And, of course, "exquisitely written" as the previous commenter noted.