On the Doorsteps of the Carolinians: Will Bernie Go 4 for 4? Part 1


(BENNETTSVILLE, SC) -- South Carolina was supposed to be Joe Biden’s firewall, his sure-win state. But the Feb. 29 primary here is now so clearly in play that the former VP is no longer even claiming that he has to win to remain a viable contender. That’s quite a descent from his early 27-point poll advantage over second-place Kamala Harris (remember her?) Biden’s early strength stemmed from the fact that the Democratic Party voter base in South Carolina is 60% African-American (whites here are overwhelmingly Republican and Trumpist), so Biden benefited from having been Obama’s #2. That may prove to be thin gruel rather than a breakfast of champions.

The view from our peripatetic, on-the-ground door-knocker navigating his clipboard and Minivan canvassing app is that the numbers being tossed around from the pollsters aren’t reliable given the significant level of detachment of large swaths of the potential voter pool from the whole primary process. 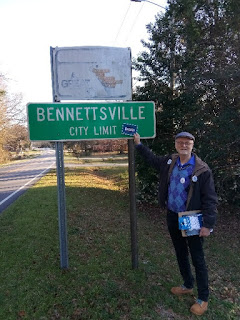 South Carolina is a far cry from Iowa and not just because of its mild temperatures. In our brief introductory outings, we have found a much less engaged populace, voters who have enjoyed far less outreach from any of the multiple campaigns slugging it out for a decent showing, and an enormous—almost shocking—level of undecideds.

We arrived last weekend on a Bernie Bus originating in the Philadelphia area and hit the back streets of Bennettsville and Cheraw, small municipalities in the northwestern part of the state. Marlboro County, according to our locally based driver, is considered by some to be the cradle of the Confederacy since its government was the first to ratify the Articles of Secession that led to the attack on Fort Sumter.

The housing structure in many areas follows a typical Southern pattern: larger, more prosperous houses on a main street surrounded by tiny and often ramshackle cottages just a couple hundred yards away. These are the southern black enclaves for whom Jim Crow remains very much part of historical memory. When I commented to a group of friendly men barbecuing on Saturday afternoon that our co-canvasser was South African where people had died for the right to vote, one replied, “You don’t have to go to Africa to be reminded of that.”

As we went door to door, we encountered polite but often wary residents: at one house our team heard someone inside say, “There’s white people coming!” and shut the door. From the looks of the neighborhoods, visits from clipboard-bearing Caucasians rarely precede beneficial announcements. Some residents flatly (even proudly) refused to contemplate participation in voting for anyone, and we would often meet men who couldn’t even if they so desired—due to a felony conviction.

That said, plenty of our interlocutors were highly focused on getting rid of a certain resident of Washington, D.C., though the idea that they could have a direct role in choosing who would lead the opposition to him seemed to take many by surprise. One marvels at the level of civic instruction in local schools if indeed any takes place.

As a result, name recognition was a huge factor in voting intentions, at least among those few who had any. Tom Steyer has soaked the airwaves and mailboxes here and probably will reap a significant percentage. Biden is someone everyone knows, so people queried by pollsters could easily say yes to him merely by not knowing anything about the others. But that doesn’t translate into any solid commitment to him or even to the showing up at the voting booth.

One exception we noted was the frequent support for Bernie among young, especially male voters, a reflection of Bernie’s overall strength in this demographic. Others heard us out and expressed agreement though it’s hard to know how much to make of their cordial receptiveness.

Two incidents illustrated something about what life is like here. As we were getting ready to send off the weekend crew back to Philly, a small group of us stood in a parking lot with Dwayne, the main Bernie organizer based in Myrtle Beach. Dwayne is a hefty black dude with a beard and dreads, and Sophie, one of the travelers heading off to the train station, is a willowy, blond 20-something. The mere combination was enough to trigger a call to local police by a passer-by convinced he was witnessing sex trafficking before his eyes. An amused cop arrived on the scene, shook all our hands, and trundled off shaking his head over the foolishness. We, on the other hand, were not laughing. 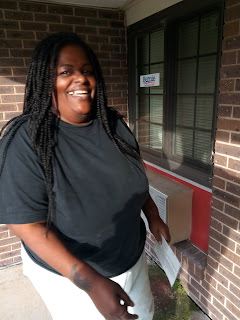 Meanwhile, an exchange heard at the local Warlmart suggests how people in this deep red territory may prefer to resolve their existential needs rather than await action from an indifferent if not openly hostile state. An African-American store worker greeted a young family who were obviously acquaintances or perhaps co-parishioners, asked after their welfare and that of relatives, and made a general offer of assistance, “anything you need, just ask.”

The speaker insisted that this was not friendly rhetoric, and the shoppers nodded. When you can’t count on anything from the guys downtown, mutual assistance surely is a much safer bet. Under such conditions, why should voting for a change of portrait in the mayor’s—or the president’s—office be a priority? 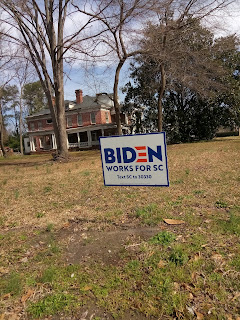 P.S. Joe Biden's support in Iowa was invisible when I spent a week there in January. South Carolina is a repeat. The only Biden signs we saw anywhere were placed, like this one, in front of houses where no one lives or along a remote rural crossroads. The crumbling old mansion sporting a Biden sign is an apt symbol of his visible presence.

[To receive alerts for new posts to this website, write to
Posted by Tim Frasca at 16:34